I am watching YouTube in utter amazement and delight as one of our very own shares video after video of catchy, inspiring, gorgeous music-most of it written and produced by her, over the span of nearly 2 decades. Somewhere between Sarah Brightman and Olivia Newton-John, with a dash of mysticism ala Stevie Nicks, whirls, twirls and stuns, Joanne Jolee-Jaffa. 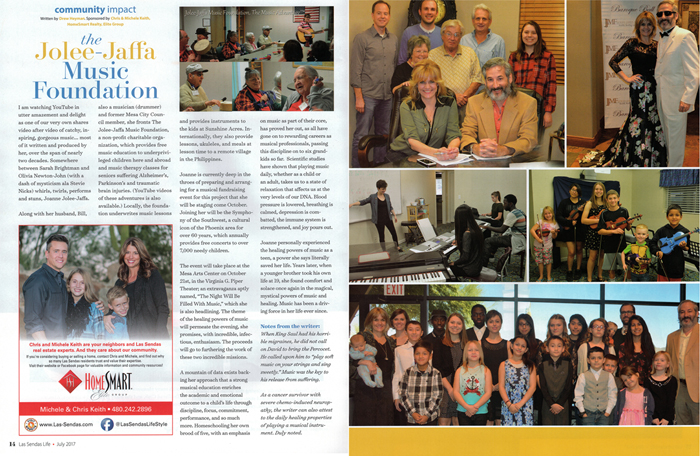 Locally, the foundation underwrites music lessons and provides instruments to the kids at Sunshine Acres. Internationally, they also provide lessons, ukuleles, and meals at lesson time to a remote village in the Philippines.

Joanne is currently deep in the throes of preparing and arranging for a musical fund raising event for this project that she will be staging come October. Joining her will be the Symphony of the Southwest, a cultural icon of the Phoenix area for over 60 years, which annually provides free concerts to over 7,000 needy children.
The event will take place at the Mesa Arts Center; an extravaganza aptly named, “The Night Will Be Filled With Music” which she is also headlining. The theme of the healing powers of music will permeate the evening, she promises, with incredible, infections enthusiasm. The proceeds will go to furthering the work of these two incredible missions.

A mountain of data exists backing her approach that a strong musical education enriches the academic and emotional outcome to a child’s life through discipline, focus, commitment, performance and so much more. Home schooling her own brood of five, with an emphasis on music as part of their core, has proved her out, as all have gone on to rewarding careers as musical professionals, passing this discipline on to six grand-kids so far. Scientific studies have shown that playing music daily, whether as a child or an adult, takes us to a state of relaxation that affects us at the very levels of our DNA. Blood pressure is lowered, breathing is calmed, depression is combated, the immune system is strengthened, and joy pours out.

Joanne personally experienced the healing powers of music as a teen, a power she says literally saved her life. Years later, when a younger brother took his own life at 19, she found comfort and solace once again in the magical, mystical powers of music and healing. Music has been a driving force in her life ever since.

Notes from the writer:
*When King Saul had his horrible migraines, he did not call on David to bring the Percocet. He called upon him to “play soft music on your strings and sing sweetly.” Music was the key to his release from suffering.
** As a cancer survivor with severe chemo induced neuropathy, the writer can also attest to the daily healing properties of playing a musical instrument. Duly noted.